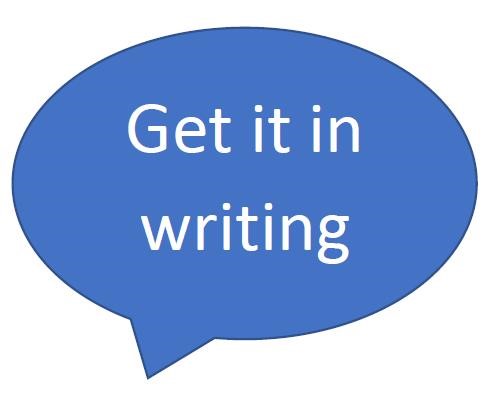 The benefits and pitfalls of the written word

“Always get it in writing — and never put anything in writing.”

I received this guidance early on in my career from a seasoned professional. It initially confused me because the first part seemed at odds with the second.

Do these twin pieces of advice actually complement each other, and do they hold up in today’s world? I’d say a resounding heck yes to both — and here’s why.

So many encounters in business and personal life get messy due to unclear communication. There are a host of logistical and psychological reasons why some people have trouble communicating through spoken language. Many also have difficulty expressing themselves effectively in writing, but at least it’s easier to get clarity when you have an email thread or group chat to refer back to. Memories of conversations are notoriously fickle.

That’s why it’s a good practice in life to jot down what people say whenever possible — and that’s now made a lot easier with the constant presence of mobile phones and other devices. Following up an in-person or phone conversation with, “Hey, I’ll send you a summary of what we talked about so you can tell me if I got anything wrong” is a simple way to confirm understanding. It also lets people know how their words were perceived and reminds them what they committed to doing.

If you’re uncomfortable asking for people to put things in writing because you’re afraid of seeming incompetent or overly formal, there’s nothing wrong with just saying, “Can you please shoot me over a message reminding me what we talked about and agreed on? I have so many meetings that I want to make sure I don’t mix things up.” Or some variation of that. Having things in writing helps hold all parties accountable for their words and avoids misinterpretation.

Now on the flip side, we need to be VERY careful what we put in writing. Expressing an unkind opinion  about someone, requesting inappropriate special treatment or lashing out before thinking through what we want to say and what the consequences might be… we’ve all been there, and it rarely has a good outcome.

As technology has made all too obvious, everything you commit to in writing — in texts, emails, intranet communication, blogs, social media posts or good old-fashioned paper documents — will likely live forever. “Private” messages are rarely private knowing that they can be screen-shotted and shared, hacked or accessed by someone operating the message medium itself.

So even in today’s jacked-up, overstimulated world — when time is precious and it’s all too easy to shoot out your thoughts in seconds — it’s best to think carefully about every word you commit to posterity. A little caution, self-control and diplomacy never hurt anyone! (Now if I could only follow my own advice…)